Sometimes it is useful for an app to launch at login. While a user can always accomplish this in the system preferences, having the possibility to turn on auto-launching inside the app is better. While in the glorious past this could be implemented in a number of ways, now in the age of the sandbox it is quite tricky to achieve. This tutorial will show how. It is a more comprehensive sequel to Delite Studio’s tutorial from October 2011 and /dev/random’s tutorial from January 2012.

To create a login item for your sandboxed app, use the SMLoginItemSetEnabled function (declared in ServiceManagement/SMLoginItem.h) as described in “Adding Login Items Using the Service Management Framework” in Daemons and Services Programming Guide.

This is at least something. Turning to the Daemons and Services Programming Guide, it give us some more hints:

So as we need to have a helper app in order to launch the main app at login, all we have to do is to create a helper app, a main app and to add some specific code to both of them. Doesn’t sound too difficult. The following instructions have been tested with Xcode 4.3 on OS X 10.7, use ARC and are Mac App Store approved. You can download the tutorial source code, if you want.

First, create a new empty main app (the name of the example app used in this tutorial is LaunchAtLoginApp) and close its window. Then do the same with the helper app (its name being LaunchAtLoginHelperApp here). To make things easier to maintain, we’ll then create a Xcode workspace and add the two apps to it. Make sure that you add both apps’ Xcode project files (.xcodeproj extension) to the workspace and not the project folders. Then, drag the helper app’s icon beneath the main app’s icon in the Xcode navigator area, as this will lead to your helper app being added to the main app project file. Your workspace’s navigator area should then look like this:

Tamper with the Main App

Our main app will need a number of tweaks to work. First, we’ll have to add a new build phase so that the helper app will be part of the main app’s bundle. In the main app’s target (not project) build settings tab, add a new copy files build phase, set the destination to ‘Wrapper’, the Subpath to ‘Contents/Library/LoginItems’ and drag&drop the helper app’s executable file into the list beneath it. 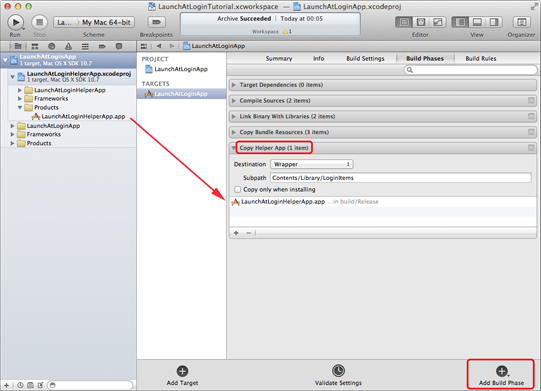 Next, in the main app’s target (not project) summary tab, we enable the sandbox and code-signing and add the ServiceManagement.framework to our frameworks. This should look like this: 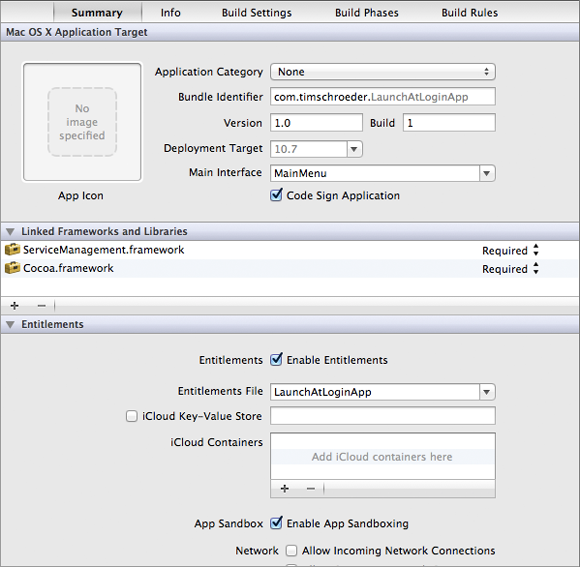 Then we have to modify the main app’s target (not project) build settings by changing the ‘Strip Debug Symbols During Copy’ setting, as follows:

Now it’s time for some code. In the main app’s AppDelegate.h file, add these lines to the class declaration:

In the main app’s AppDelegate.m file, add this line of code to the import section:

And add these lines to the implementation section:

The -toggleLaunchAtLogin method will turn on and off auto-launching and is quite straightforward. Obviously, we should really save the state of auto-launch in our user defaults, but I’ve skipped that here. Please note that you’ve to give your helper app’s bundle identifier string to the SMLoginItemSetEnabled function.

In your main app’s MainMenu.xib file, add a NSSegmentedControl to the Window, name it’s segments like shown below, connect the AppDelegate’s outlet to it and its action method to AppDelegate’s -toggleLaunchAtLogin method. Your main app’s window could now look like this: 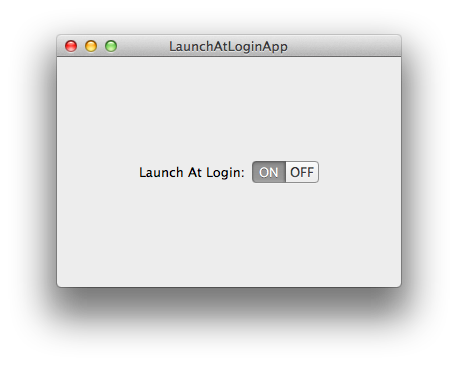 Tamper with the Helper App

Let’s now turn to our helper app. It has only one purpose: Launching the main app. It doesn’t need an interface, so in its MainMenu.xib just delete its main window. In its Info.plist file, add a new line to make the helper app background only: 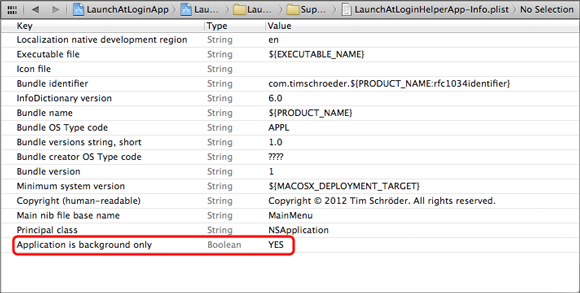 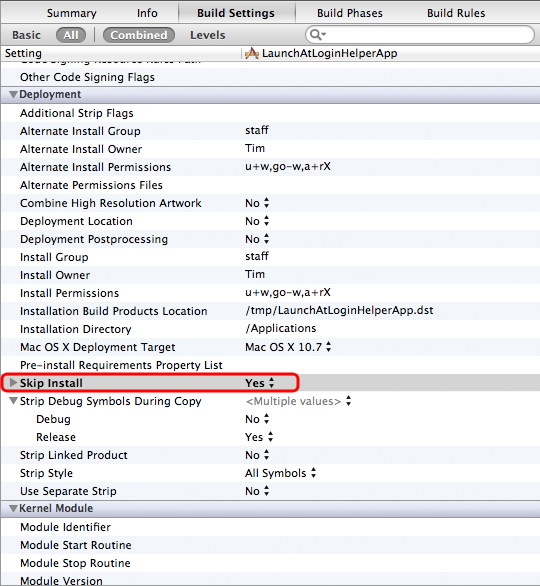 Finally, it’s again time for some code. In the helper app’s AppDelegate.m file, add these lines:

This should be more or less self-explanatory. We need to check if the main app is already running because the helper app will be launched everytime we set the auto-launch to ON via the SMLoginItemSetEnabled function in the main app. The way I construct the file path of the main application is not especially nice, but it works. Homer Wang has suggested an improvement to this code snippet which you can find on Stack Overflow.

Please make sure that you’ve entered the correct developer certificate information for both the helper app and the main app. This should typically look like this:

Now build your main app (that will build the helper app, too) and right click on the product to show the build project in Finder. Go to Finder, copy your main app’s executable file and paste it to your /Applications folder. Start the main app, turn on launch at login and log out. Then, a deep breath later, log in again, and your main app will be launched in a most mysterious way. In your main app’s code, you can even check if the main app was launched at login. (Please see below for update).

Though this will work, there are some caveats:

If you want to check in your main app if it has been launched by the helper app at login, please read the Detecting Launch At Login Revisited blog post.

You may have noticed that beginning with OS X 10.8.2 the console will show some strange log statements when the user toggles the launch at login setting. The log statements look like this:

lsboxd[4886]: Not allowing process 5010 to launch “/Applications/LaunchAtLoginApp.app/Contents/Library/LoginItems/LaunchAtLoginApp Helper.app” because the security assessment verdict was denied.

After some research, I noticed that everything will still work in spite of these statements. However, I managed to get rid of them by modifying the codesigning process of the main app: The log statements will not appear if the main app bundle is signed with the developer’s Developer ID certificate.

The reason for this dependence on a specific certificate is, as far as I know, not documented, but it seems that in addition to the requirement that an app has to be located in the /Applications or ~/Applications folder in order to be able to schedule launch at login (see above), in OS X 10.8.2 it also has to be signed with an Apple distribution certificate. A distribution certificate is issued to you by Apple when you are a paying member of the Mac Developer Program, and typically, you’ll have four of them:

In addition, you’ll typically have one development certificate to sign apps for internal development and testing purposes, especially if developing an app that uses push notifications or iCloud. If you run an app from within Xcode, it will be signed with this last type of certificate if you use the sample code I’ve provided. Trying to change the launch at login setting of the app when the app is signed with this type of certificate will lead to the log statements shown above. The log statements will also be shown if you archive the app, export it as an (not specifically signed) application within from the Xcode Organizer and then run it, as the app is then, at least if you use my sample code, signed with the 3rd Party Mac Developer certificate meant for Mac App Store distribution (but this will work fine if you then actually submit the app to the Mac App Store and download it from the Mac App Store).

The right way for testing your app locally is to have your main app signed with this type of certificate:

This is the application distribution certificate meant for distribution outside the Mac App Store. To sign your app with this certificate, archive your app and select this option in the Xcode Organizer: 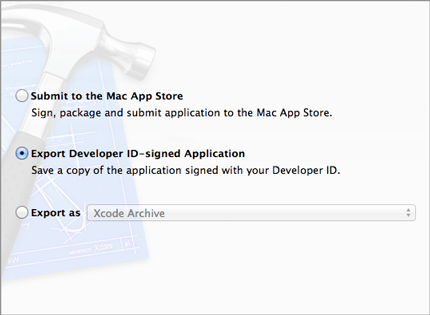 The resulting app bundle will be signed with the right certificate and if you run it from the right location (see above), there won’t be that log statements.